After about ten days, it began to get clear that this was a relocation and not a vacation. A big part of this was beginning to make our space feel lived in by us.

While our IKEA trip felt like a clusterfuck, it did result in some furniture being delivered and assembled mid-week. Penny’s room began to be a place she actually wanted to spend time.

That said, the delivered goods hinted at our exasperated states of mind at check out. We somehow received:

One seated bench for the porch, but double the cushions, largely because we didn’t understand that when we ordered 2 of something, we’d actually wind up with what on the floor looked like one product. It was essentially two chairs that could and were combined into one bench. Over/under on how long it takes us to return the extra cushions is currently set at a full calendar year.

Three Trofast shelves, but only enough drawers for 1.5 of them. We only intended to get one to store toys. No idea how the quantities got so screwed up. They were assembled already so we found closets to stick them in and ordered more drawers online.

Two end tables instead of six. They apparently ran out. Apologies to our early guests as the guest rooms are more spartan than intended as a result.

A lamp, purchased in Singapore, with a plug that does not work with Singapore outlets. Why they even sell this is still baffling to me.

When our relocation support offered to take me to legitimate furniture stores that didn’t include anything that would need assembly on arrival, I was eager for the opportunity. The items we got on this trip felt much more personal to who we were which went way further in making the house feel homey.

This piece sits behind our couch and displays the week’s current library haul. Keeping library books separate from personal books is a big sanity saver for me. It saves me from having to dash around the house, frantically recounting to sixteen endlessly. (Can you tell someone is going through a serious fairy tale phase?)

This poster with ingenious poster hanger makes me smile every time I see it. And Penny also picked out a panda clock and this amazing cloud lamp set. 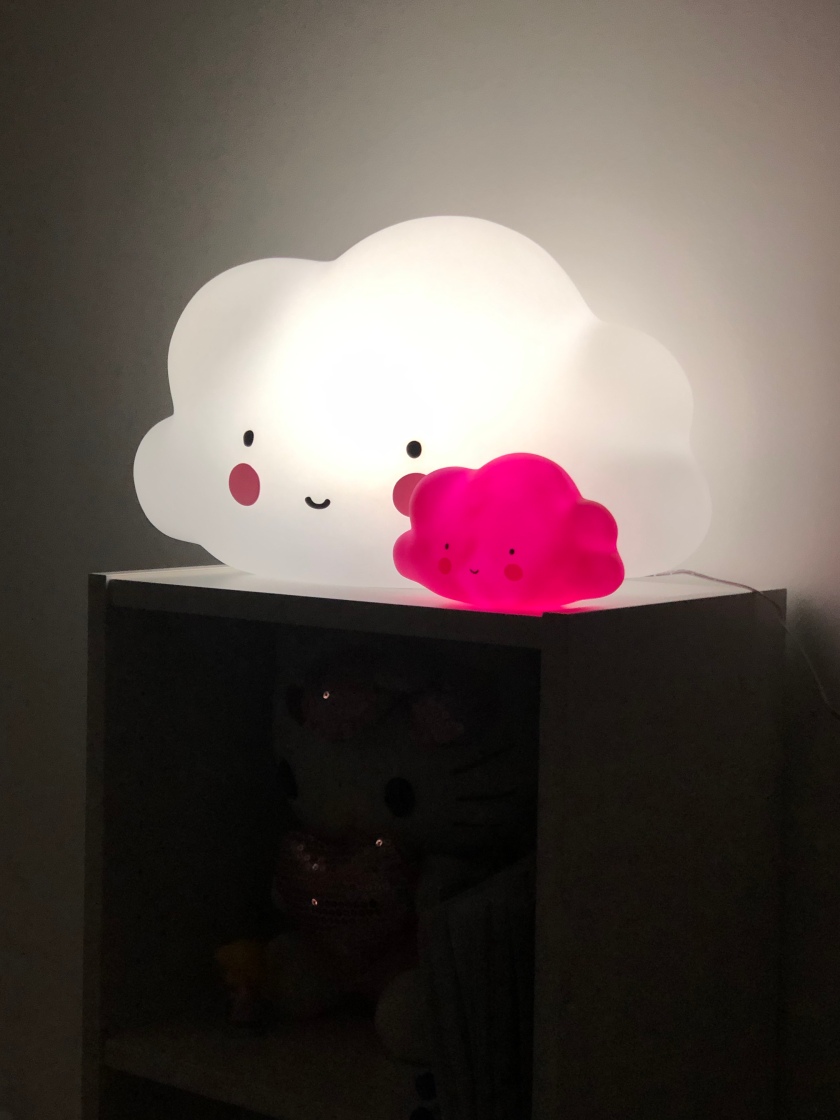 I splurged on some cushions and throw pillows in the color of my soul.

The final puzzle piece was the arrival of our seventeen boxes from the states, after more than three weeks in transit. Our beloved Nugget reclaimed its place as the perfect spot to read and snuggle. Our bookshelves began to fill up. We were able to replace the plane markers which had almost entirely dried out from cap replacement negligence. My stockpiles of Tubby Todd and Beautycounter sunscreen were replenished. And Penny was finally reunited with her blocks, puzzles, games, and baby doll accessories.

Hanging things on walls seems to be more trouble than it’s worth, so we’re utilizing the universal 3M line of wall friendly adhesives and I’m still waiting for some cork boards and push pins to be delivered. Washi tape has also been a big win for sticking things to unpainted surfaces.

We even had some of our outdoor furniture delivered for our balcony. It’s been a great state change when Harper starts the day at 5am.

Now we’re just waiting to see who will be the first set of guests to make us make up the guest beds. In the meantime, Penny’s toys that she wants drool-free have taken up residence on one of the spare queens and the other is home to that extra set of IKEA cushions. We’d much rather have visitors. ❤️