“Learning and teaching should not stand on opposite banks and just watch the river flow by; instead, they should embark together on a journey down the water. Through an active, reciprocal exchange, teaching can strengthen learning and how to learn.”

As a kid, I loved school. I excelled in school. I was frequently reprimanded for being chatty when I finished my tasks, but boy did I ever love completing the tasks themselves. My favorite thing was always stories – reading them, writing them, illustrating them, but over time I came to realize I could teach myself anything by playing on this strength. My college notebook for Neuroscience is a testimony to this – scientific concepts turned into doodles, processes rewritten as narratives. Even numbers have their own personalities like the cast of a play.

It took me a while to see that excelling as a student was actually a limitation as a teacher. Initially, I expected to be able to teach the way I was taught. If I just passionately lectured about great texts, the kids would be sure to catch my enthusiasm, right? Listening to someone who loved books rant and rave always did it for me. It didn’t take me long to see that this approach completely failed to consider the varied learners in front of me. And teaching without considering the kids in the room is the very definition of a fool’s errand.

Now my daughter reminds me a lot of me. She loves stories, has no difficulty sitting criss-cross applesauce on command. She loved her first “school” and I loved the care she received and the friends she made. But if I’m honest with myself, we chose her daycare because of our needs. One opportunity that I saw in relocating, and no longer working, was that I could throw myself fully into the school search in Singapore. School expenses are covered by Seb’s company and Singapore has every early childhood education option under the sun. Since it’s a small enough island, you’re not really limited by geography, especially if you’re open to busing and/or have one adult with a flexible schedule.

I scoured glossy magazines, did countless google searches, stalked social media accounts, and conducted four school visits only to ultimately choose the place that first spoke to my heart. 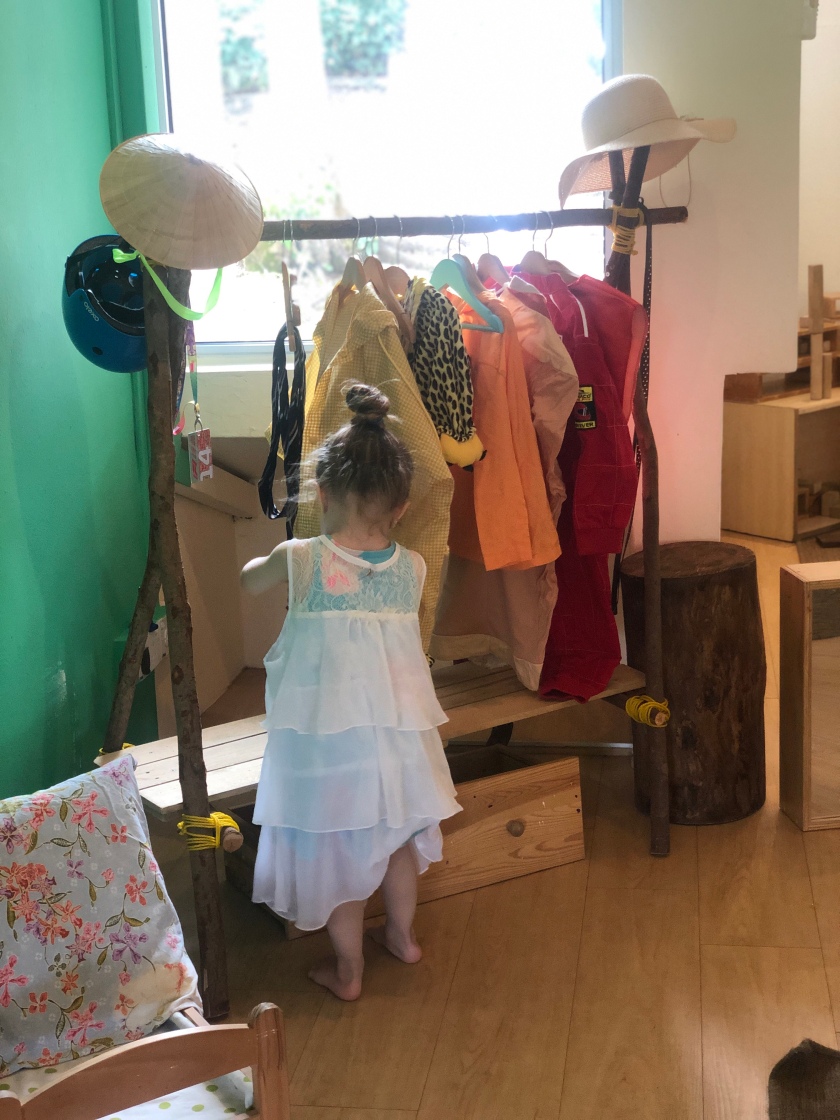 Penny helping herself to the dress up corner at orientation.

The Blue House is a Reggio-Emilia inspired early childhood education center that actually respects that children can drive their own inquiry and believes that despite their diminutive size, they deserve to be respected as full human beings.

There are countless schools here that claim to be Montessori or Reggio, but a visit to the facility makes it clear that for many, if not most, these labels are more buzzword than guiding principle.

As a educator myself, it’s pretty easy to tell when instructors value kids and love working with them. I’ve been lucky enough to see this combination in my colleagues and it’s the kind of thing that makes you fully trust other humans with your babies.

However, as I stepped farther down the road as a parent and an educator, I began to feel prickles of cognitive dissonance when a practice I encountered at work didn’t seem like something I’d choose for my own child. I’ve always felt that my students are my kids, and as such they deserve the same opportunities I’d want for my own progeny. I’m so grateful that my former school continues to evolve and become increasing progressive, that it’s not afraid to question things that have always been done a certain way if they no longer sit right with us.

This is the first year that I’m heading into a September as just a parent, and being able to fully focus on this side of the equation has given me more insight to what a school looks like when it fully embraces the individuality and worth of each child, when it truly believes that children are indeed humans worthy of respect.

The truth about our policies in education is that they are a coin, and on the flip side, they communicate our beliefs – about kids, their potential, their families. When we take a child’s temperature upon arrival, we are telling them that our acceptance is conditional and we are telling families that we don’t trust them to know their child and/or to consider the other children in shared care. When we mandate a uniform, we are telling children that they are interchangeable, a collective more than an individual. We are saying that we aren’t interested in giving them choices and honoring personal preferences if those things make our lives more chaotic. And we are creating situations that inevitably become power struggles as children develop and start to feel rankled themselves by policies that are at their core disrespectful of their individuality and autonomy.

When my own children were abstract, a lot of this was harder for me to clarify. I never wanted to take recess time away from a kid struggling to behave, but I didn’t really understand why. Now, I know firsthand that play is important work, and it’s the very place where kids build their capacity to self regulate. Yet, schools withhold recess from the children who are struggling most to regulate themselves in the classroom on a daily basis. I wouldn’t want my child to get this kind of reactionary, illogical treatment and I will no longer be a part of meting it out to other children.

I used to spend days in the summer beautifying a classroom, only to have daily conflicts with kids who didn’t care for it like it was a sacred space. Sure, most kids recognized the love that went into the work and did their part to keep things neat, but I now see that those who left trash behind were probably communicating that this space felt more mine than theirs, and that perhaps me leaving them out of its creation was a part of the reason why.

I hope and expect to return to the classroom and so I’m eager to use this time to do the kind of critical reflection that is so hard to fit in each day when there are thirty plus living, breathing, feeling people expecting you to lead and love and keep promises to them. I’m paying close attention to precisely what it is at Blue House that made me say “THIS! I WANT THIS FOR PENNY!” so that I can seek to replicate it for all the kids I hope to teach.

Blue House has an art-based atelier that students can elect to spend time at during the school day. During orientation, Penny found her way there and created a string of beads on her own volition and the teacher promised it would be hanging from a branch outside her classroom for the first day.

Currently, Penny is enrolled from 9-12 most days with 9-3 occasionally. We’ve already talked about how doing this for term one will let her give us feedback on what she prefers. She came with us on all school visits, and while she was enchanted by every nice playground, it was only when leaving Blue House that she asked “Mommy, when can we come back here?” She woke up Saturday after our Friday orientation and spend the morning asking me why it wasn’t Monday yet.

I feel so lucky to let her voice and her needs have a seat at the table because for a long time they really didn’t. It lets me feel that we are together, with her teachers and classmates, on this journey as equals, as individuals collectively striving for a common goal: that she learns to lean into her natural curiosity, to trust her capacity to learn on her own terms and define those terms for herself – for the work of education isn’t memorizing theorems or dates, it’s learning how you learn so you can continue to immerse yourself in anything that interests you, beginning with the passions of childhood and extending beyond your retirement.

The teachers I respect most are quick to point out how much they learn from their students. The parents I look up to always help me see that when I’m feeling challenged by my children it can be traced back to a lesson I’ve yet to wholly master. Age simply means we’ve had more at-bats, but life is infinitely complex and nuanced and if we’re honest with ourselves we are all always learning alongside one another.

I’m confident that I’ve found the optimal place for Penny’s formal pre-K education to commence and even though I’m actually not in the classroom in any capacity myself, I’m still excited for all I’ll learn this school year too – about education, about my children, about the world, and about myself.