As soon as I phased out of the trick-or-treating age range, I seldom if ever bothered to dress up for Halloween. But having a kid gave me an entirely new lens for the holiday, and Penny had three Halloweens in the states, a day more magical with each passing year. Halloween 2018 is still emblazoned in my memory because she asked me to recount that day aloud to her at bedtime for months. I knew that if I didn’t find a way to celebrate over here on the other side of the world, I’d be disappointing my bigger little one.

Now in Singapore, Halloween was super proximate this year to Deepavali, or Diwali, which is a recognized as a public holiday. Falling on Sunday, October 27th, businesses and schools were closed the following day. Then, Penny got to learn a lot about the Hindu Festival of Lights when she returned to school Tuesday. She sculpted a diya and made Rangoli from lose parts. I loved watching her horizons broaden and her respect for other cultures deepen. But I also missed the adorable Halloween parade that her preschool had every year. I mean who doesn’t love a string of small children in costume holding on to a rope so they don’t toddle off and get lost? There were definitely pieces of the American Halloween experience that we both wished we could recreate overseas.

While children’s costumes are available in Singapore, the range is limited to the same stock characters. Spider-Man and Elsa are easy to find, but Penny had her heart set on Little Red Riding Hood. In one sense, this was a great choice to bridge any cultural divide – versions of this traditional story exist all over the globe. But it was hard to find from a vendor here, and I’m without even a hot glue gun. Thankfully, Penny made up her mind early enough that I could secure the costume in the states, ship it to my mom, and ask her to forward it along. We haven’t had a ton of luck with the mail here, so I was relieved when this package made it to us intact.

Trick-or-Treating was also a puzzle to solve because we live in a condo where the elevator is a direct line into our home. There are literally no doors on which to knock. I had heard rumors of condos organizing festivities despite this roadblock, but nothing materialized in the condo mom WhatsApp group, so I had to do a lot of internet sleuthing to find what we were looking for. There’s a neighborhood in Singapore that goes all out for Halloween, but I was warned it would be overwhelming for a three-year old. Woodlands essentially throws a giant candy-fueled block party that would delight any elementary age child, and part of me wanted to see it, but it seemed logistically fraught with much potential to backfire.

The first Halloween-themed event I found was underwritten by a media company that publishes a magazine that is basically an extended advertisement of kids activities in Singapore. It was throwing an afternoon Halloween scavenger hunt at a small shopping center that seemed targeted at the preschool crowd. I signed us up right away and Penny and I gave it a shot. The treats were sparse and the lines were long and it definitely wasn’t an experience I’d repeat.

I later stumbled across an enthusiastic American expat’s facebook event – she had rallied her neighborhood and extended an open invitation to anyone craving a traditional Trick-or-Treat trail. It looked perfect, except it was the Saturday before Halloween. This is definitely a young child-friendly accommodation, but it didn’t settle the issue of how to commemorate the actual day. I decided we’d try it and just take Penny. On the Saturday, they emailed out a map of which houses were participating and suggested a couple routes you could take. We picked one with about fifteen houses on it, which was a perfect length. Penny was super excited to wear her costume and nearly everyone we passed pegged her on the spot. It was just crowded enough that we got the fun of seeing other kids in costume without the stress of feeling like your vertically challenged child will be trampled. I made sure to gratuitously thank the volunteers for a wonderfully orchestrated event and I can easily imagine going next year with both kids. 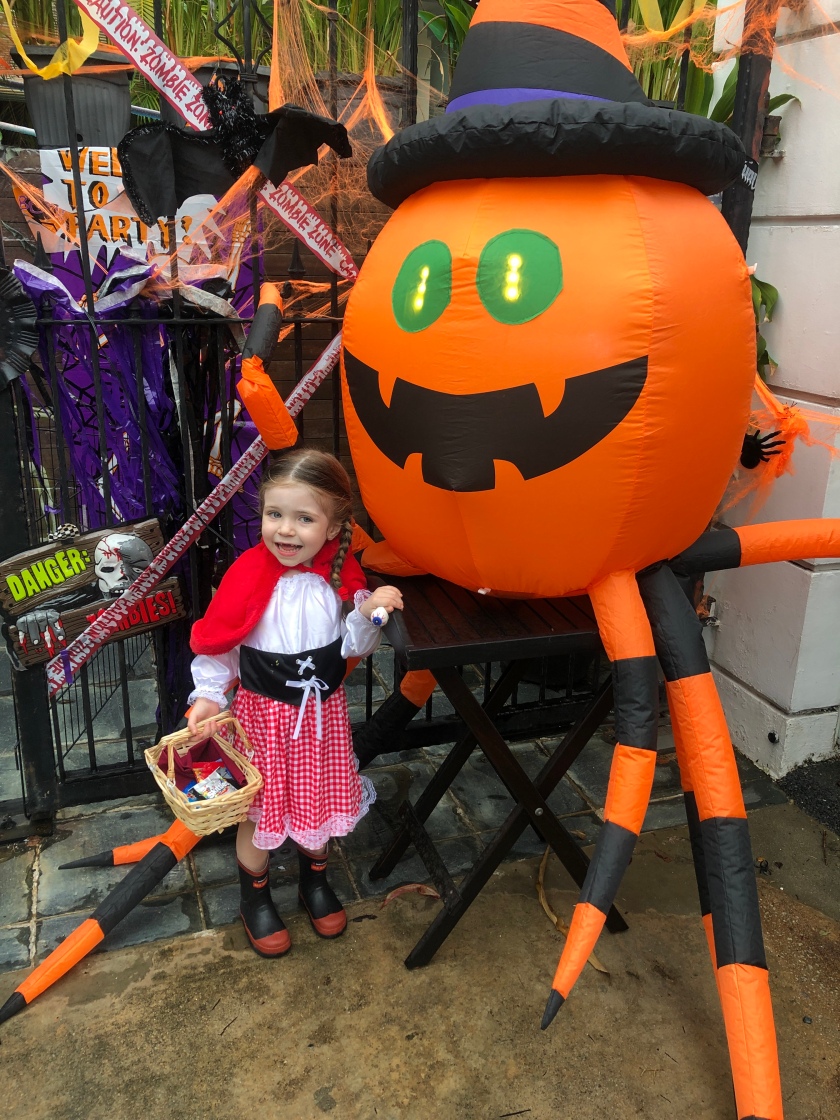 This left the actual day of Halloween to troubleshoot. My sole stroke of genius was to volunteer to visit Penny’s class this day and read a story. If you know me, you know I’d be happy to do this kind of volunteering on a daily basis, but I had held off on pushing the issue, waiting for Penny to request I visit for story time. She was very exited about sharing one of her favorite Halloween reads – Pig and Pug Trick-or-Treat with their classmates so this worked out perfectly. Her school has a pretty clear policy on not bringing sweets to distribute, so I decorated some mini-oranges in homage to jack-o-lanterns and called it a day. The whole experience lasted less than ten minutes, but at least our American “holiday” got some airtime with an adorable crew of kids who were all too eager to tell me what they were dressing up as. Despite their multi-national heritage, costumes and candy seem to be something most kids want experience first hand.

That afternoon, Penny decorated the pumpkin we had stumbled across at Cold Storage, painting it “rainbow”, which essentially became brownish gray when all the colors blended together. She then directed me to carve a turtle on it, and everyone knows turtles and Halloween are an age old dynamic duo. Oh well, when it comes to things like this, I’ve made the parental decision to give her as much executive control over the things that really in their essence are supposed to be about the child. As much as I’d love to carve an intricate thematically on point pumpkin myself, at $30, we could only afford one.

At this point, I wanted to get Harper in on the festivities in some capacity, so I dressed her in Penny’s first costume and toted both girls to a nearby neighborhood that someone’s Facebook comment suggested was hosting trick-or-treaters that evening. Hardly a fool-proof way to get a recommendation, I had been told festivities began at 5:30, but this gorgeous street is undoubtedly home to many dual-income families and at 5:30, there were only a handful of houses open for business. By 6, we began to see more doors opening, but Harper was nearing bedtime. Seb had intended to meet us but he had gotten held up at work, and when the end of day hysterics started, heading home made the most sense.

In many ways, expatriating has never been easier than at this moment in history. We can fly direct to our native airport. Most companies have a global reach ensuring your favorite brands from back home and on some shelf here. iMessage allows texts to seamlessly travel over WiFi. With a VPN, you can trick your phone into thinking you’re still in NJ and get the same Netflix offerings. There’s FaceTime and social media instead of snail mail and calling cards, and I’m constantly aware of how I benefit from undertaking this journey at this point in time.

But I do I have some anxiety about how the rest of the year will unfold from here. I have zero intention of honoring Thanksgiving properly. Penny will turn four in December and I’m not sure if it makes sense to have the kind of invite the whole class party she’s used to from the states. Then there’s Christmas and Harper’s first birthday and it’s a reminder that much of what makes commemorating these occasions special is the people you share them with.

On the plus side, we have our first visitors arriving later in the week, Seb’s parents! We’ve been getting their guest room ready and can’t wait for them to arrive.